It’s a beautiful day here on the Kiwi Homestead.  As we’ve almost finished settling into our new home I thought I might take this opportunity to share with you our new herd.  As part of our long term goals, we set out to find only rare breed or heritage animals for our farm.  We looked at several different kinds of goat breeds before settling on one of the rarest and most endangered pure breeds in the world known as Waipus. Waipus are thought to be related to the original angora (mohair/woolly) type goats but unlike the modern angoras of today, they are not hybrids.  They have pretty much kept to themselves as far as breeding and there are fewer than 50 in the world today.  We found a local breeding couple who have been spearheading the efforts to save this beautiful heritage breed.  They just happen to be quite close to us locally and were very much looking for other families such as ours to help take on some of the 30 odd goats that they had! As a result of many discussions and quite a lot of thoughts and prayers, we decided to get 6 Waipu goats of our own.  Normally a starting flock would consist of 3 females and 1 male, but in our case, one of the females we had chosen had recently given birth to a boy so we ended up with a little baby goat buckling and the bigger goat buckling we had picked out.  The breeders were also trying to rehome an older retired female goat, but we fell in love with her and we have plenty of space so we agreed to take her as well!

Our new herd’s names are as follows

“Be sure you know the condition of your flocks, give careful attention to your herds; for riches do not endure forever and a crown is not secure for all generations. When the hay is removed and new growth appears and the grass from the hills is gathered in, the lambs will provide you with clothing and the goats with the price of a field.  You will have plenty of goats’ milk to feed you and your family and to nourish your servant girls.”

As always please follow us along our journey and enjoy the photos below!

The challenge of raising turkeys

When Victor and I decided to move to Canterbury we were very interested in finding a place where we could become self-sufficient and build a sustainable life.  We started small by raising chickens in the city and growing a veggie patch. We always knew we wanted to do bigger things.   Now, I come from a long line of people who are used to eating turkey for a special day in November.  You might know what I’m talking about… That big day in the US when two birds are on death row for being turkeys and one is famously pardoned?

Yes, I’m talking about Thanksgiving.  Well in New Zealand it is really hard to come by turkeys prior to Christmas and even then they are extremely expensive.  Americans are used to basically buying all the “fixings” (ingredients) for Thanksgiving dinner (and pre-Christmas shopping for presents) and if they spend enough money the shops will often throw a whole turkey in for free! Even a small (by American standards) frozen turkey would cost about 90 New Zealand dollars.  That’s out of our price range for just the meat for one meal, to be honest.  So instead we’re growing our own.

Turkeys themselves are very interesting creatures.  They tend to be excellent “egg-sitters” and go broody easily but they’re terrible mothers who often lose track of their turkey (or chicken) chicks.  They are also not very smart and will accidentally squish a bantam chick that they’re trying to keep warm.  The males are stunningly feathered and have very hilarious and comical “strut-dances” as they eye their females.

Now it happened that our three species of hen — turkey, chicken and guinea fowl — all started laying eggs at about the same time. It also turned out that at least one guinea fowl, at least two turkeys, and several of our chickens were male. Barnyard complications ensued. For example, the females would all share the same nesting boxes when laying, and so the broody birds ended up sitting on assorted eggs that would take different lengths of time to hatch. Moreover, even though we had more nesting boxes than simultaneously broody females… You know how in real estate, it’s said that the three most important words are, “Location, location, location?” It turned out that some nesting boxes were particularly highly sought after, so that we might find two turkeys and a big chicken in a nesting box that might comfortably accommodate one large bird or two small ones.

We also discovered something biological. As mentioned previously, turkeys don’t make very good mothers, so we salvaged a lot of our early eggs to incubate them at home (we’re still living off site). Many of the hatchlings were easily identified, but there were some that confused us. They came from little white speckled eggs, so we thought they were guinea fowl chicks, but as they grew they looked way too much like either chickens or turkeys. Well, as it turns out, guinea fowl are capable of interbreeding — and producing viable offspring — with both chickens and turkeys! So we now have guinea chickens and guinea turkeys running around. Do not try this at home, kids — guinea fowl hybrids are high-spirited animals.

It was shortly after that, for (mostly) unrelated reasons, that we decided to sell our adult guinea fowl. But that is a subject for another post.

We will leave you with a picture of our star turkey, Tom, although his career is now drawing to a close.  Jerry will continue on in his place as per tradition!

Verses of the day

2 Thessalonians 3:5 “May the Lord direct your hearts into God’s love and Christ’s perseverance.”

Romans 15:13 “May the God of hope fill you with all joy and peace as  you trust in Him, so that you may overflow with hope by the power of the Holy Spirit.” 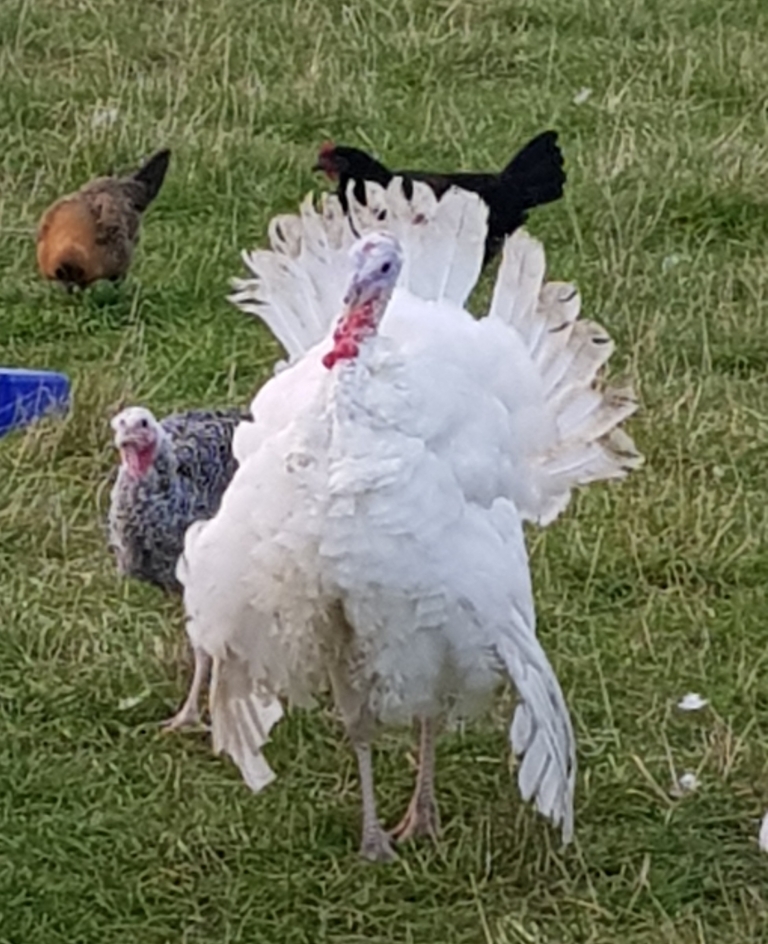 Hello, my fine readers! How are you today? Have you been doing any fun projects lately? What about God’s mission? Is He leading you on any interesting paths?

Well, Victor and I have been sort of pulled into a strange mission by our ears. It would seem that God in all of His infinite wisdom needed us to become homesteaders so that we would make connections with people nearby and join a movement to save one of His critically endangered goat breeds.

In New Zealand, there is a small island with a long history leading back to good ol’ Captain James Cook. The story goes that in 1773, Captain Cook decided to leave a couple of his favourite goats with the leader of a tribe on a small island located in the Marlborough Sounds, at the northeast tip of the South Island of New Zealand. He is said to have also released a few of them into the wild just prior to setting off at sea so that if he ever came back he would have an instant food source. The breed that developed from those goats is known as the Arapawa Island Goat. There are less than  (correction 400) live Arapawas in the world today. They may, in fact, be the most critically endangered goat breed in the world.

So you’re probably wondering why this breed should matter to you … Well, from what I’ve read and heard about through the NZ Arapawa Goat Association, these goats are special.

They have unique genes which are only very distantly related to any other currently known breed. Unfortunately, the breed of goat that Captain Cook raised (the Old English goat) is considered extinct as far as we know so we cannot test current day Arapawas against the Old English Goat genes to see if they are the same. It is unlikely that they are the same exact breed because the span of several hundred years is more than enough time to change a breed’s genetic heritage. That said, these are believed to be the closest thing that we have to that old hardy everyman sort of goat.

Unlike many of the commercial breeds who have been specifically bred to be dwarfed, Arapawas are naturally small. A full-size Arapawa is not usually much bigger than a medium sized dog. They have great milk from what I’ve heard, which is said to be as sweet and as creamy as the Nigerian Dwarf breed, but having the nutty flavour of a Nubian. They are also naturally high milk producers despite their small size. I can’t wait to try some myself!

Arapawas are also really healthy animals from what I understand. While they may not have as much immune protection to commercial farming (they do suffer from worms fairly easily), their immune systems are great at lifestyle and small farming ventures. They lived for hundreds of years without much input from man but are also very humanly social and friendly after only a couple of generations of domestication. Victor and I considered trying to get a normal breed like the Nigerians, or the Nubians, but when we were faced with an opportunity to help save a special variety of goat it made total sense to us to try. I mean, just look at this face!

Please consider helping to support this critically endangered species by praying, volunteering, donating to the cause, or maybe even taking on a few of these beautiful creatures if you have the time and space! Please click on the links below for more information!

May God bless you and keep you!

*all photos courtesy of Heather O’Neill on the Arapawa Facebook group’s page. Thank you very much for allowing me to use your beautiful animals here!